How to Approach a Woman at the Gym- 6 Non-Sleazy Hacks!

How do you talk to a woman at the gym?

One of the questions I often get from my male clients is: How do I approach women in the gym?

Many men are worried how this action will be perceived as gyms are not seen as a traditional place for meeting potential dates. But I am going to give you six quick tips on how to speak to women in this particular environment.

I know you’re thinking you can’t talk to women there. And you’re right, women tend to not go to the gym in order to meet a boyfriend or a great new date. But, you may be surprised that if she’s single and looking to meet someone, she may be okay with having a date from the gym. Not all women are against talking to people at the gym.

(Case in point, I actually met my husband at the gym!)

So how do you go about making that connection with her in a way that is non forceful, non pushy, and that gives her loads of room to see if she’s reciprocating this interaction?

Hack 1: Check out group classes at the gym

My first piece of advice for you is potentially to check out a class style setting. Now, you may be a hardcore fan of the squat rack. But if you go to a class where there’s a group shared activity like Zumba, body pump, or yoga, it will be much easier to get a conversation going. You could strike up a conversation while queuing up before the class starts. Or at the end of the class, there’s usually a point where people are wiping down their exercise mat or collecting their stuff.

The fact that you have shared an experience, and you’ve participated in the same thing will provide great conversation starters. Could you comment on how tough that class was? Maybe you weren’t expecting yoga to be so intense? Or that you really liked the teacher?

All of these things are very subtle and soft ways to kick start a conversation. They’re not creepy or lecherous. And they simply give her the opportunity to respond and join you in the conversation if she feels comfortable.

So yes, it may mean that you’re off the squat rack for a session a week. But by changing up your gym routine, it will give you a much better opportunity to meet women.

(If the gym is not your thing, road my blog on how to meet women at the coffee shop!) 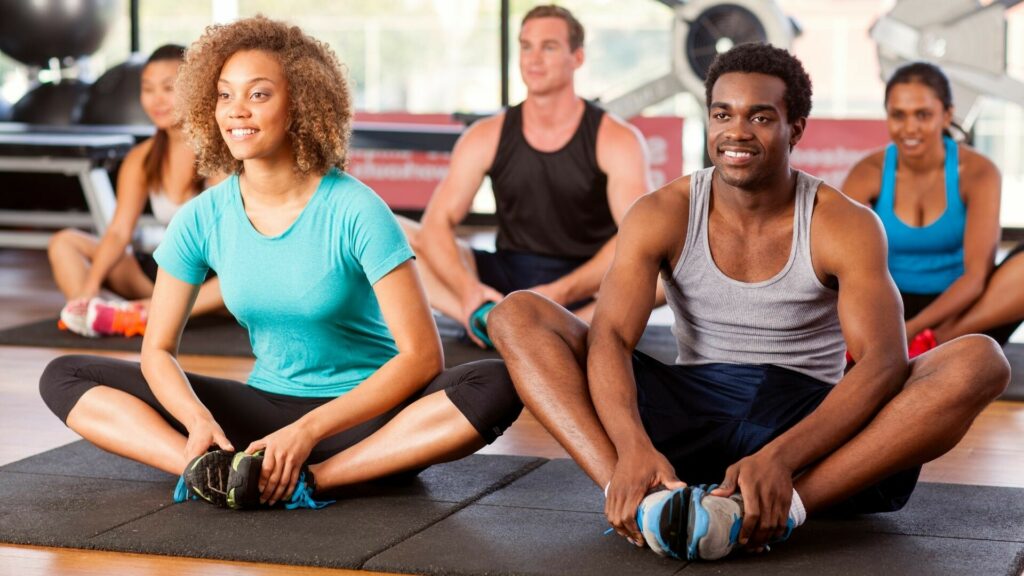 My second piece of advice is to talk to her in a moment where she’s not actively engaged in doing something. If she is hitting it hard on the treadmill, it’s going to be very hard for her to sustain a conversation.

People tend to find starting conversations easier when they’re relaxed, and not preoccupied with something else. A great place would be by the watercooler, at the reception, while walking out of the gym, or perhaps in that part of the gym where people are stretching after their workout.

Those are often going to be better areas for you to begin a conversation where you’re not interrupting her from doing an intense activity.

Hack 3: Talk to her several times at the gym before asking her out

My third tip for you speaking to women at the gym is to simply remember that you don’t need to go from talking to her at the gym, to getting her phone number all in one conversation. If there’s a local gym that you go to regularly, and you’ve seen this woman around, it could be enough just to start the conversational ball rolling.

Maybe get to the point where you swap names and then leave it until the next time you see her. In that next conversation, once you address her, if she reciprocates, that’s a pretty good signal that she’s open to furthering this conversation. 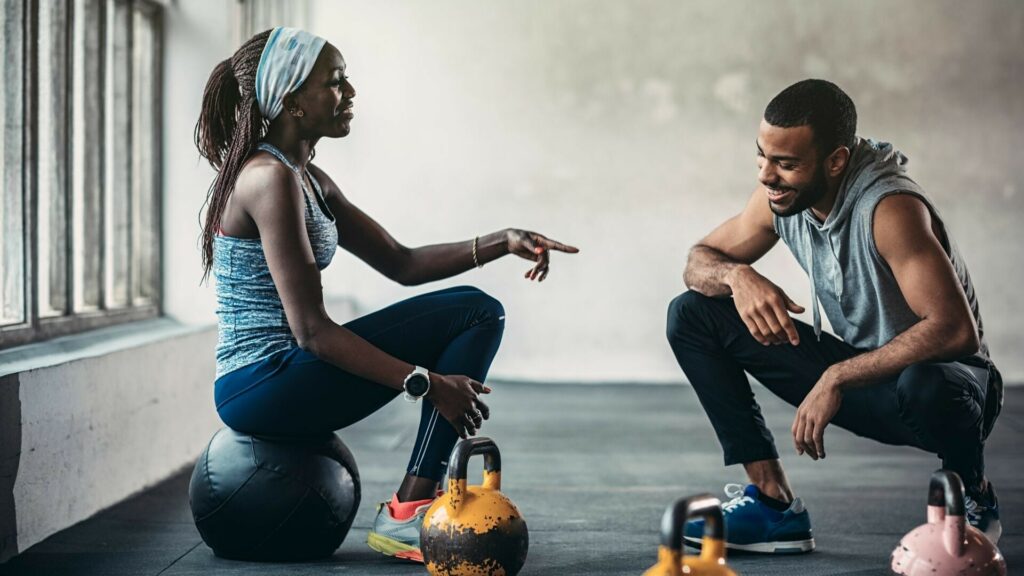 Never tell women how they can improve their technique or do something better (unless you are a certified PT, and even then go steady!)

Chances are she’s just as competent at working out as you are. And she may baulk at the idea of some guy barging in there and telling her how to do things better. If anything, you can flip this around, show some humility. For example you could tell her like that she’s got that technique nailed. You could even say something like:

I’m kind of envious of how you’re really good at doing that manoeuvre. I can never quite work it out.

At that point, you’re immediately showing you’re not egotistical. You’re humble, you’re open and easy to talk to. So rather than giving her advice in the gym session, it can actually be better to be the recipient of one. I know that might sound strange, but it all comes back to the environment that you’re in. Remember you are in a gym, you don’t want to make her feel uncomfortable. Instead, give her the opportunity to come to you.

Hack 5: Compliment her actions, not her looks

Avoid any compliments that are physical and that can be easily misinterpreted as leering or overbearing. She looks really great in her gym outfit, but chances are if she’s trying to work out she doesn’t want to hear that. Instead the complements that will always work better is to focus on something that she’s actually doing.

It could be the technique that she’s done, the energy that she puts into the class, her coordination. Stick towards complements which are about something that she’s actively done. At the same time stick well away from commenting on how she looks. 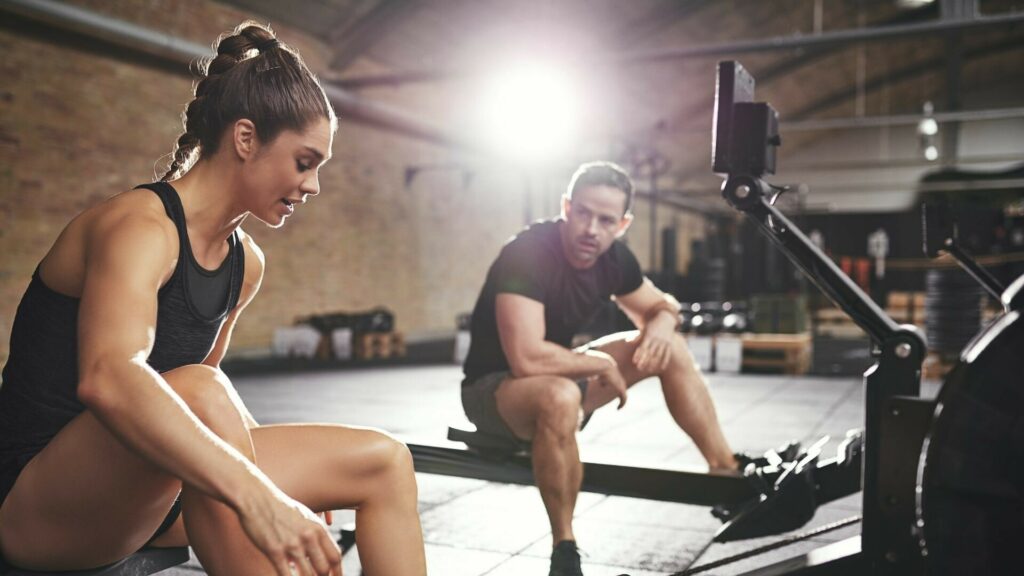 My final piece of advice for how to talk to women at the gym is to be polite. Again, this might not sound like the normal dating advice you would receive. But remember the environment that you’re in. She’s not there to get a date, but she might be open to connecting with someone who comes across in a really great way.

So if you’ve got the opportunity to let her queue jump in front of you, or to let her get to the watercooler first, show these little gestures of chivalry. They won’t make you appear weak, but like you’re aware of your environment around you. It will present you in a non threatening way and give you a very easy way to kick start a conversation and give her that opportunity to join in that conversation with you too.

Learn how to meet amazing women!

Any place, any time!