What do women want?

Today I am going to share with you three friendzone busting lines. Now, I don’t usually like to teach lines because I think every interaction should be based on your authentic and natural personality. However, what I hear time and time again from the female clients I work with is that they think that no good guys are left in existence. So, if you’re one of the good guys out there I want to make you more visible to women so that they know you exist.

Women want guys that have good qualities. They want guys that have emotional sensitivity. Guys that listen to them and have good moral values. The thing is if you’re on a date with a woman and there’s no energy or excitement beyond the initial connection, she might not realize what a great guy you are.

If you’re constantly in a position where you’re finding that women are not recognizing your good qualities and that maybe women don’t give you a full and complete charge, I will teach you a few things that you can say on a date in order to pique her interest and make her more attracted to you.

Class is about to start

The few things that I’m going to teach you I don’t want you to copy and replicate them straight away. I really want them to be your own. However, I do know it’s so important that if you’re on a date with her to do a few things that signify we’re not here as friends. This is an actual date!

Sometimes it actually means that you create a bit of more tension on the date so there’s that feeling of spark and excitement. So, if you’re getting a lot of feedback from women at the moment saying that they never feel the spark, I really want you to take note of the ones that I’m using here. Think about how you can put them into your own words!

The first line is: “I just realized why I’m so attracted to you [pause]”. Now if you say something like that say it nice and slowly and calmly and make great eye contact with her. Add a pause after it, and it will create excitement about what you are going to say next. It will create curiosity, make her listen more to the conversation that you’re having.

Now the best thing isn’t saying you’ve got nice boobs or legs or hair. Say something about her personality that’s going to give her a much deeper sense of validation and reward. So, if you say: “I’ve just realized why I’m so attracted to you! [pause] It’s actually really rare to find someone who’s got a passion for their life path.” or “It’s because you’ve got a quirky sense of humour”. If you say something so specific it’s going to do a double thing of creating tension and spark. As well as validating her in the right qualities. 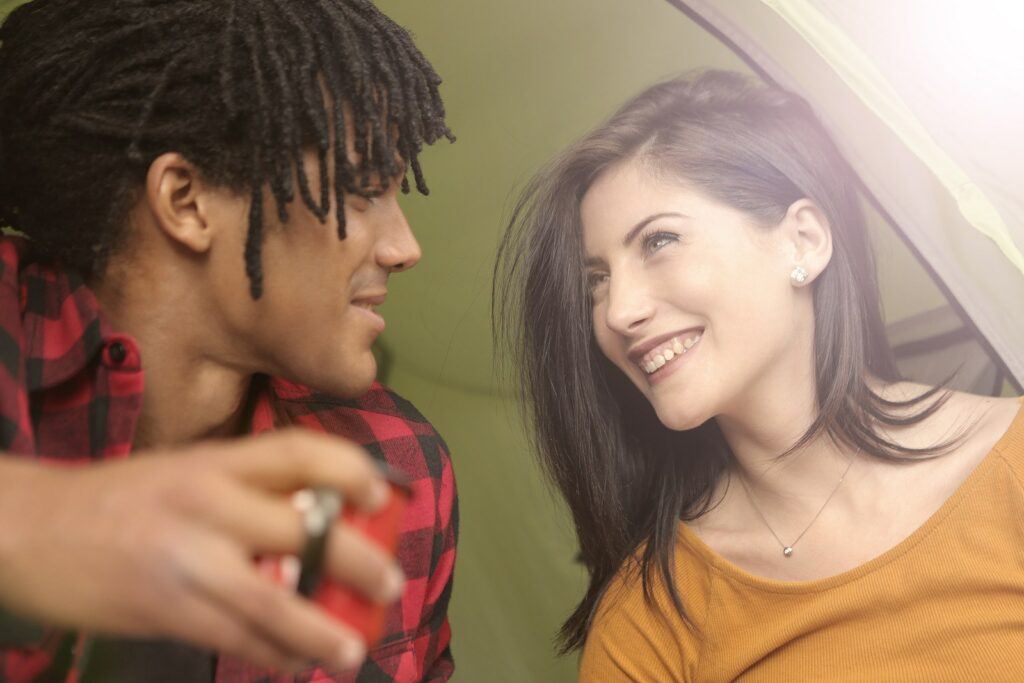 Another great way to add tension into your date is to say something like: “There was actually another reason why I initially said hello to you.” or “There was actually another reason why I sent you a message on that dating app.” Again, this is the one that creates curiosity where she wants to know what was the reason that prompted him to contact me?

Women are not into the idea that you might have just been chatting up everyone that day or furiously being on the online dating app trying to get a match. Instead, it will be so much more validating to her and will emphasize the romance and the fantasy of being on the date with you if she feels that you’ve actually chosen her profile. Or you’ve chosen to approach her for a specific reason.

This is why it’s so good for you to uphold really good standards for yourself as well. If you’re entering dating from the mindset of I just want somebody to like me. I want an attractive girl that I like to be nice to me. and then going after every single woman you see, that says that you have quite low standards.

I want you to not only be approaching women that you find physically attractive online and offline. I need you to be actively thinking: “Does this woman have the qualities that I like in people?”

I know you might be worried when on a date, what is the right moment to go for the kiss or how she is feeling about that. So, the next line that I’m going to suggest that you use is something that actually puts you in the women’s mindset.

You could say something like: “I’d like to kiss you but I’m not sure we know each other well enough yet.” What you do here is a little swap around. Instead of being the guy who’s there leering over the women or constantly putting a lot of sexual pressure on her, you actually verbalize what the woman might be thinking. This makes a very open conversational space where she feels that she can say what she’s thinking about the kiss.

It’s super playful, it puts the idea of kissing you into her mind without any neediness around it. So, if you say that really slowly and really confidently it makes her think about kissing you and it shows that you want the kiss but you’re not a guy that’s really desperate and anxious about getting it. It’s a really good way to increase tension on your dates!

Now why I’ve given you these three very specific friendzone busting lines to use? It’s quite frankly because I think that women often feel like there’s no decent guys out there and all the guys they meet are like super arrogant or super players. Or not the right guys for them. Now I know on the other hand that there are loads of guys that are trying to get women to give them a chance.

So, if you want women to give you more chance and realize why you shouldn’t be in the friendzone and why they should actually date you, you need to work to increase that sexual edge and tension on your dates. Use the lines or a variation of these that really suits you and fits your personality. Communicate that not only are you the guy that’s got some emotional sensitivity, not only cool, only nice but also sexual. And that this is a date, not just two friends hanging out.

If you’re one of the good guys out there and you want women to realize what you’re all about, I want you to head over to Haley Quinn site. I’m all about giving the good guys that sexy edge and helping men and women to actually understand one another. And maybe get on and get together.