How to build self-esteem?

This article is written by Nick Hatter

If I’m totally honest, I would say I loathed myself for many years.

The story I had made up was that I was just simply not good enough as a human being.

I had several points of reference to back this up with, after all: my older brothers were mean to me at times and I felt I was quite unpopular at school, college and even at university, and I seemed to have quite a few unrequited loves in my life.

So if right now you feel your self-esteem is a bit shaky, I know where you’re coming from.

Your interpretation may be incorrect

When I was around 14 years old, I asked out this one girl at school, Valerie. Like me, she was good at maths, and we were both in the top set.

Unfortunately, when I asked her out in front of her friends she said ‘no’.

Then her friends laughed.

The story I had made up in my mind was: ‘She said no because I’m not good or attractive enough.’

This would later become part of the story I believed about myself: ‘I’m not good or attractive enough.’

Over 12 years later, I reconnected with Valerie.

She’s happily married now with two kids. We reminisced about the good, the bad (and the ugly) of the rough state school we went to (which had terrible reports from school inspectors).

As we were catching up, Valerie said something that would completely blow me away and make me question my identity story.

‘Nick, do you remember when you asked out all the girls in our year?’ she teasingly asked.

‘Oh, man. That was an embarrassing phase of my life! And I asked you out too!’ I replied.

‘Well… here’s the thing… that day you asked me out… I wanted to say yes – badly! And I couldn’t because I was too scared of what my friends would think. And that day, I was so upset that when I got home, I cried!’

I was shocked when she said this.

‘Wait for a second! You mean to tell me that for 12 years, I thought you had rejected me because I thought there was something wrong with me?’

I couldn’t believe it. All this time, I had assumed I was the problem. That I was simply not good enough and not handsome enough.

Where else had I created a story like this and was wrong?

This reminds me of one of my clients, Anja, who was a celebrity dancer; attractive, very successful, and with loads of Instagram followers.

She had been on TV a lot and was interviewed by the press many times. But Anja was going through a breakup – and, like many relationship breakups, her self-esteem was taking a massive hit, because the story she had made up was that she was to blame and that she wasn’t good enough.

While she wasn’t clinically depressed, Anja had days where she just wanted to binge-eat and stay in bed all day.

Her career could have been doing better and her agent was starting to get a bit concerned about her performance. I suspect had I not intervened when I did, she could well have ended up needing more clinical or even psychiatric help.

I did a very simple exercise with Anja: I drew a horizontal line with a vertical line intersecting it on a Post-it note and asked her, ‘What does this mean?’ 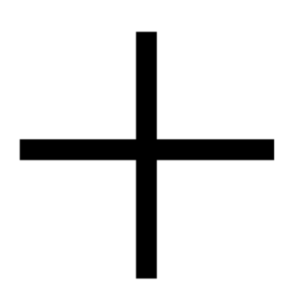 She squinted and then said, ‘It’s a cross.’

All by herself, she had managed to come up with several different interpretations.

‘You see, human beings are meaning-making machines,’ I explained to her. ‘You’ve looked at the same symbol but notice how you’re able to come up with several different interpretations.’

Then I asked her, ‘You seemed pretty sure about your first interpretation. Given that there are several possible interpretations and meanings, how do you know for sure which interpretation is the correct one?’

I then asked her to look at the symbol again.

‘This time, I want you to look at this symbol, but I want you to imagine it’s your breakup we are looking at, and I want you to do the same process we just did – you seem to be good at finding different interpretations.’

‘Well… my first interpretation is that it’s all my fault. I made several mistakes in the relationship. I could have treated him better.’

‘And what other interpretations could there be?’

‘Well, what other explanations could there be for him wanting to end the relationship?’

Anja thought for a moment, and then replied, ‘Maybe he’s going through some of his stuff right now?’

‘Hmm… Maybe he and I are not compatible together?’

‘That’s interesting, I never saw it like this before.’

The map is not the territory

Suddenly, it seemed like Anja had a lightbulb moment. Her face lit up. Something had shifted. I could have told her the answer, but it’s often much more powerful when the client comes to the realisation themselves.

All I did was introduce Anja to the neurolinguistic programming (NLP) presupposition of ‘the map is not the territory’.

NLP is a psychological framework that examines how thoughts (neuro), language (linguistic) and behaviour (programming) interact with each other.[1]

It can provide practical ways in which we can change the way that we think, view past events and our perspective on our life, such as by presuppositions, which are convenient assumptions or beliefs that are generally helpful for both professionals and clients to assume. In Anja’s case, it was life-changing.

According to NLP, we often respond to our subjective map (perception) of the terrain (life), of people and events, rather than actual reality.

It’s a bit like looking at a faulty map which says there’s a lake in the terrain, but when you look at the terrain itself, you realise there is no lake – the map itself is wrong.

Our beliefs in life can be exactly like that incorrect map – just like I was wrong about why I thought Valerie had rejected me. And the same can go for our identity and who we think we are.

Using the interpretations exercise with the ‘cross’ symbol, Anja was able to find a new interpretation for her breakup – one that was more optimistic and less self-blaming.

On her first session, she had rated her self-esteem at 3/10.

As I tell my coachees: one of the best ways to improve your self-esteem is to stop blaming yourself for other people’s crappy behaviour.

Where in your life are you taking too much responsibility for others’ behaviour?

How many interpretations can you come up with for the symbol in this article?

This article is an excerpt from the book, ‘The 7 Questions’, which is due to be published in January 2022 and is written by Nick Hatter – a top London life coach. To learn more about life coaching, go to www.nickhatter.com

The author retains the copyright to this piece and grants permission to Hayley Quinn Ltd to use this excerpt.

Read more on self-esteem here: Tips For Building Your Self-Esteem